Between 6 and 9 November the students from SEK-El Castillo, Alexia Jiménez and Beatriz V, participated in SYMUN, Spain Youth Model United Nations, as delegates representing the United States in the Human Rights committee. Alexia was given an honourable mention as best delegate on the International Court of Justice committee.

At SYMUN, the Model United Nations organised by Carlos III University of Madrid, in collaboration with the Association for the United Nations and International Law (ANUDI), Secondary and Baccalaureate students from all over the world came together to step into the shoes of diplomats from all the Member States of the United Nations. There they debated on topics of great international relevance such as Human Rights, the environment, peacekeeping operations or the 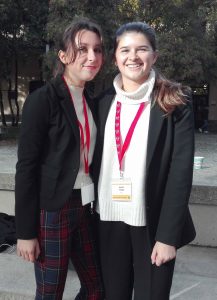 role of children in armed conflicts, among many others.

The committees, which intervene in both Spanish and English, and the topics of this year were the following:

Special Political and Decolonisation Committee (SPECPOL): Responsibility of countries to their former colonies.

United Nations Educational, Scientific and Cultural Organisation (UNESCO): The use of biogenetics for scientific research.

UN Women: Challenges and opportunities in achieving gender equality and empowerment of rural women and girls.

Historical Committee: The crisis of 98.